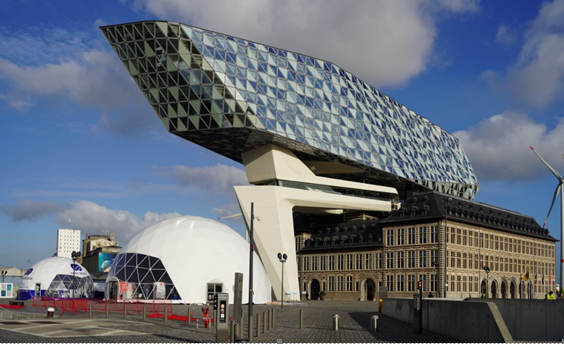 The Antwerp workshop was held in the spectacular setting of the Antwerp Port House designed by Zaha Hadid. Photo credit to Bernard Frois, CEA

Members of Innovation Challenge 8: Renewable and Clean Hydrogen (IC8) are identifying focus areas where global research and innovation effort is likely to generate the most impact in the short term. The “hydrogen valleys” concept, a geographical area – a city, a region, an island or an industrial cluster – where several hydrogen applications are combined together into an integrated hydrogen ecosystem, will be one of the focus areas. The consumption of a significant amount of hydrogen and the coverage of the entire value chain in the “Hydrogen Valley” will offer a pathway for scaling up and making this technology a viable solution and will showcase the sectorial integration capability of hydrogen.

The momentum around hydrogen is building up

Hydrogen is expected to become one of the building blocks of a low-carbon economy.  The topic has recently gained momentum with multiple initiatives launched across the globe. 28 European countries have signed the Hydrogen Initiative calling for intensification of sustainable hydrogen R&I, the first Hydrogen Energy Ministerial Meeting was held in Japan in October 2018, IEA prepares a major report on hydrogen as a key input to the 2019 G20 Presidency of Japan and Australia is working on its national hydrogen strategy, to name a few.

In that context, a new MI Innovation Challenge on Renewable and Clean Hydrogen (IC8), co-led by Australia, the European Commission and Germany, was formally announced at the Mission Innovation Ministerial in Malmö in May 2018. The members of this Challenge recently gathered in Antwerp to discuss the concept of “Hydrogen Valleys” as a blueprint for scaling up the sustainable hydrogen market.

What role can the Renewable and Clean Hydrogen Innovation Challenge play to move the sector forward?

The potential of the technology is considerable. With a broad range of possible uses, hydrogen offers a realistic pathway to lower emissions in hard to abate applications and industries such as heavy-duty transport, heating, steel making and chemical processing. However, the challenges are not negligible, either. The sector still needs to reduce costs and resolve infrastructure gaps.

Finding the solutions to these problems will require far reaching coordination among stakeholders, industry and governments alike. Research, innovation, development and market activation will play a crucial role in developing the hydrogen economy as a viable option for societies. It is in this context that Mission Innovation, with its strong links to national governments and private sector, is well positioned to catalyse progress.

The Hydrogen Innovation Challenge members[1] have decided to identify a limited number of well-defined focus areas where global R&I effort is likely to generate most added-value and to identify actions that will have maximum impact in the short term. This is how the concept of collaboration around “Hydrogen Valleys” came to life as a way to provide critical mass through large-scale multi-application hydrogen projects.

What is a “Hydrogen Valley” and why does it matter?

A “Hydrogen Valley” is a geographical area – a city, a region, an island or an industrial cluster – where several hydrogen applications are combined together into an integrated hydrogen ecosystem that consumes a significant amount of hydrogen, improving the economics behind the project. It should ideally cover the entire hydrogen value chain: production, storage, distribution and final use. As such, “Hydrogen Valleys” offer a pathway for scaling up and making this technology a viable solution.

At the same time, “Hydrogen Valleys” are extremely important for showcasing to decision makers and to the public the unique value hydrogen offers in the broader energy system context through its sectorial integration capability. Although many demonstration projects have successfully shown the maturity and benefits of individual hydrogen technologies, typically either in isolation or in a limited size, the potential of hydrogen as an integrated systemic solution has not yet been proven at scale.

However, replication is not straightforward when it comes to “Hydrogen Valleys” as there is no “one size fits all” solution. Different countries have different circumstances, especially in terms of their economic, geopolitical and environmental situations as well as the available infrastructure base. The transition to a hydrogen economy therefore requires different answers depending on location. This is why the participants of the Hydrogen Innovation Challenge decided to share their experiences in order to de-risk and facilitate the emergence of new integrated hydrogen projects in support of their countries’ policy priorities.

The two-day Antwerp workshop gathered more than 80 attendees with interest in nascent “Hydrogen Valley” projects from Hydrogen Innovation Challenge member countries representing governments, industry and research community. Fourteen case studies were presented from all major jurisdictions exploring hydrogen as a future energy vector: Australia, Austria, Chile, China, EU, France, Germany, Italy, Japan, Netherlands, the UK and the US, with additional input from the Port of Antwerp and the Hydrogen Council. Multiple project types were presented – from industry driven clusters, through ports, communities and regions with abundant renewable energy or those under pressure to tackle air pollution issues, up to mining sites or knowledge driven communities.

The participants discussed the emerging lessons learned and critical factors for successful delivery of these complex projects. Some of the main conclusions pointed towards the absolute importance of leveraging partnerships to establish committed consortia and share risks efficiently among the stakeholders. The need to properly communicate the benefits and engage the local population was also highlighted. The workshop confirmed that although projects are very specific to local circumstances, there is room and readiness to exchange experiences, best practises and lessons learned. Specific areas for cooperation include business models, regulatory obstacles, permitting and certification, standards, technology assessments, mapping of the major existing and planned R&D projects in areas most relevant for “Hydrogen Valleys” etc.

As a follow-up of the workshop, the IC8 members will now work on establishing an information–sharing platform. This platform will leverage, consolidate and disseminate the existing knowledge and support building of global alliances around “Hydrogen Valleys”. The European Union will initially host and finance the platform through its Fuel Cells and Hydrogen Joint Undertaking programme.

The workshop coincided with the stopover of the Energy Observer in the Port of Antwerp.

The Energy Observer is the first vessel in the world powered by hydrogen produced on-board from seawater and renewable electricity, without greenhouse gas emissions. The catamaran uses solar panels, wind turbines and a hydrogen fuel cell system for power provision. It relies on sun or wind during the day and taps into its hydrogen reservoirs at night. Energy Observer is sailing the globe for 6 years, and visit in total 50 countries, stopping in more than 100 ports to demonstrate that a future entirely based on renewables is possible and safe.

The Energy Observer is living proof that hydrogen technology works, even in challenging maritime conditions. It plays an important role in engaging society while making it clear that we need to familiarise the public with the benefits of this versatile molecule.

The participants of the workshop had an opportunity to tour the Energy Observer and to exchange with Victorien ERUSSARD, the Captain of the vessel, and his crew. When addressing the audience, Victorien noted that: “Energy Observer is more than just a boat, it is a model of a fully renewable future”. In turn, Patrick Child, the Deputy Director General at the Directorate for Research and Innovation of the European Commission encouraged the hydrogen community to use Mission Innovation as a platform for strengthening international collaboration and building alliances to move the entire sector forward.