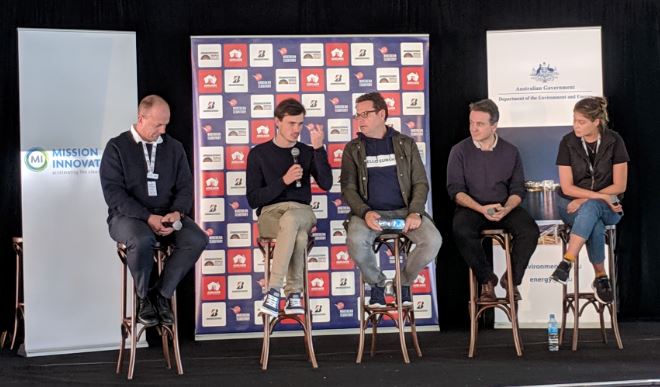 The Bridgestone World Solar Challenge is a biennial solar-powered car race which held its 30-year anniversary event in October 2017. As part of Australia’s commitment to Mission Innovation and the Smart Grids Innovation Challenge (MI IC1) in particular, the Australian Government formed a partnership with the Bridgestone World Solar Challenge to deliver the Smart Grids Pitch Competition at the 2019 solar car race.

Over 30 teams of young engineers from around the world raced through Australia’s red centre as part of the Bridgestone World Solar Challenge, traversing the nation from north to south in solar-powered cars. This year, the Australian-led Mission Innovation partnership introduced two new elements to the Challenge.

A new rule was introduced requiring competitors to ensure their vehicle design was compatible with a grid – including solar, batteries, other storage and demand management – allowing vehicles to be recharged at smart grid locations along the way.

The second element was the Smart Grids Pitch Competition, which gave six shortlisted teams from Australia, Netherlands, the UK and US the chance to pitch their ideas to a panel of entrepreneurs and energy experts. Competitors showcased their smart grid technology and exhibited its potential for wider commercial application.

In line with Australia’s commitment to Mission Innovation, the partnership demonstrates the shared imperative to raise awareness of smart grid technologies and support the next generation of clean energy researchers and entrepreneurs.

Among the judging panel was Australia’s Mission Innovation Champion, Dr Glenn Platt. Commenting on the partnership, Dr. Platt said the exciting competition will strengthen the Bridgestone World Solar Challenge competitors’ links to industry and provide rewarding networking opportunities. “It’s an incredible opportunity to take the R&D being developed through this event into the commercial arena,” Dr. Platt said.

The lucky winners of the pitch competition – Solar Team Eindhoven from the Netherlands, who pitched ideas on their mobile charging station technology – are invited to the 2020 International Conference on Integration of Renewable and Distributed Energy Resources hosted by Australia’s science agency, CSIRO. The prize includes conference registration, flights and accommodation for two.