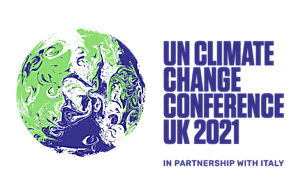 COP26 finally took place earlier this month in Glasgow with Mission Innovation (MI) members making sure clean energy innovation was firmly on the agenda throughout the fortnight. Those who attended said the busy, intense event left them feeling rewarded and inspired. For Mission Innovation (MI), COP26 was a resounding success.

Across COP26’s two-week programme, MI prominently featured at several high-profile events and announced four new missions. Below is a comprehensive review of MI’s role at COP26, and where we’re headed next. If you have a few minutes, you can also watch this MI video which was making the rounds throughout COP26.

To all those involved in MI’s efforts in Glasgow, congratulations! We are energised by your work – and we look forward to continued collaboration in the months and years ahead.

The Glasgow Breakthroughs were announced on 2 November at the World Leaders Summit. Glasgow Breakthroughs are the first step of the broader Breakthrough Agenda, a new commitment from nearly 50 countries to work across borders this decade to accelerate innovation and deployment of the clean technologies needed to keep the Paris Agreement’s goals within reach. At the summit’s Accelerating Clean Energy Innovation and Deployment event, Mission Innovation was highlighted as a key intergovernmental forum for clean energy innovation. MI’s missions on Clean Hydrogen, Green Powered Future and Net-Zero Industries were recognised as crucial initiatives to helping achieve Glasgow Breakthroughs focused on hydrogen, power and steel. 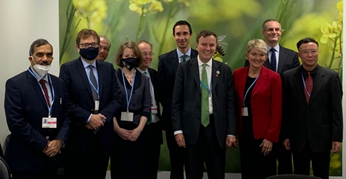 The MI and  Clean Energy Ministerial Ministers of Steering Committee countries met on 4 November to discuss how to deliver on the ambitions of MI 2.0 and CEM 3.0.

Accompanied by Juan Carlos Jobet, Minister of Energy and Mining for Chile, which hosted the last Ministerial and CEM, U.S. Secretary of Energy Jennifer Granholm said she is looking forward to welcoming her peers to Pittsburgh in September 2022.

Patrick Child, Chair of the MI Steering Committee, said impactful international collaboration will continue to be critical to accelerating global clean energy transitions – and the key innovation platform supporting this will be Mission Innovation. Darren Miller, CEO of the Australian Renewable Energy Agency, stressed the importance of Mission Innovation to deliver action-focused public and private collaborations that drive down costs of clean energy solutions. Jennie Dodson, Head of the MI Secretariat, welcomed the U.S. as host of the first Ministerial of MI 2.0 and looked forward to demonstrating progress toward its ambitious vision.

Our new Missions are:

“Mission Innovation is all about collaborating across borders and working together to innovate so we can tackle the climate crisis faster,” Secretary Granholm said. “These four new missions will turbo-charge key climate solutions and help grow clean energy worldwide, bringing with it unprecedented economic opportunities.”

Also at COP26, our “Wave 1” Missions, which were launched in June 2021, reported back on recent progress. Updates from Glasgow included: 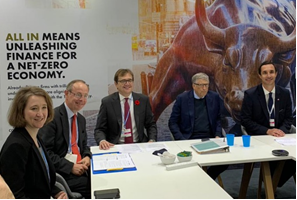 Mission Innovation and Breakthrough Energy on 3 November announced an expanded partnership to drive investment that brings technologies to market.

“The only way the world can reach net-zero emissions by 2050 is if clean energy is made affordable and accessible for everyone – especially those in middle- and low-income countries,” said Bill Gates, Breakthrough’s founder. “Expanding Breakthrough Energy’s long-standing partnership with Mission Innovation will help move that vision closer to reality by increasing our focus areas and funding for the research, development, and demonstration of new innovations and climate solutions.”

Beating the Heat: A Sustainable Cooling Handbook for Cities was launched 3 November by Mission Innovation, the Cool Coalition, UN Environment Programme, Rocky Mountain Institute, the Global Covenant of Mayors for Climate & Energy and the Clean Cooling Collaborative. The handbook offers planners an encyclopaedia of proven options to help cool cities, with 80 supporting case studies and examples.