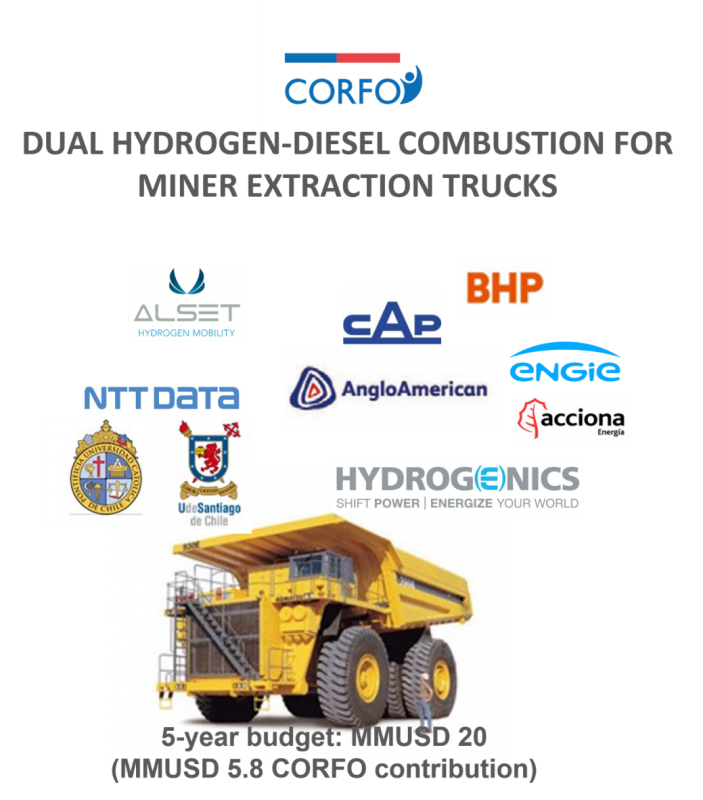 Used with permission from Corfo

The mining industry is energy intensive. By co-combusting hydrogen in a conventional miner truck engine, the solution aims to reduce the CO₂ footprint of mining products and the dependence of the mining industry on fossil fuels. The suggested approach is to use a modified conventional diesel engine and substitute most of the diesel fuel with hydrogen. The solution focuses on the development of a mining truck prototype powered by a dual-fuel hydrogen/diesel engine, which includes an onboard hydrogen storage system to test the powertrain on a truck in a mine.

While hydrogen has been known for a long time as a possible fuel for internal combustion engines, it has not been evaluated at scale in the mining industry. Using hydrogen as fuel in a conventional diesel engine, there is potential for replacing significant volumes of diesel. The target is to develop a prototype heavy mining haul truck to perform on-site testing, and to evaluate the results to identify the thresholds for implementing the solution at a commercial scale. The key efforts of the project concern changes in the control of injection of fuels and combustion controls, along with a hydrogen storage system.

At present, the daily use of diesel fuel in a haul truck in a relevant mine in Chile is 3200 liters, which contains energy equivalent to 941 kg of hydrogen. If the truck ran in dual-fuel operation with a substitution rate of 60%, the daily need for hydrogen would be 564 kg, substituting 1917 liters of diesel. With a buffer and the potential to increase the diesel substitution rate to 75%, a storage of 700 kg of hydrogen could be installed on the haul truck which would further increase the potential to reduce emissions.