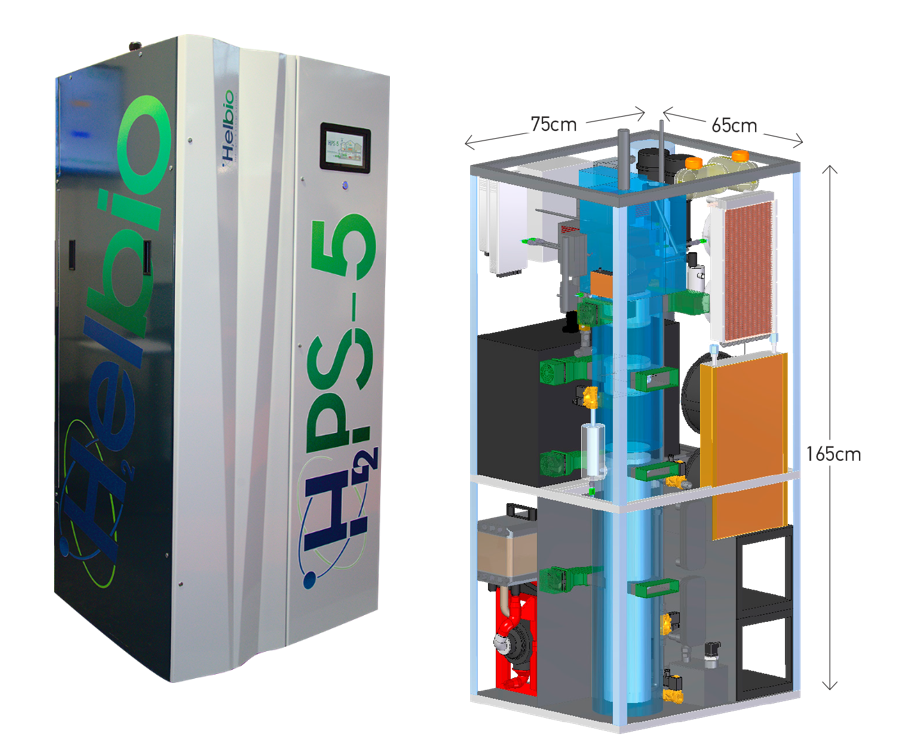 Helbio’s technology is an alternative solution to conventional power systems designed for dual operation, either as an Auxiliary Power Unit (APU) delivering up to 5 kW electric power or as a Combined Heat and Power System (CHP) delivering up to 7 kW thermal energy with almost no atmospheric pollutants. It is compact and silent and has an electrical efficiency of more than 35%. Compared to a diesel generator, it has much lower maintenance needs and emits 170 times less NOx and hydrocarbons, 27 times less CO and no SOx, while consuming 54% less fuel. In addition, the system is multi-fuel fed, i.e. it can operate with either natural gas, propane/LPG or biogas.

Helbio participated in the AutoRe EU financed project which covered the design and construction of a hydrogen generation unit (fuel processor) and the integration with the hydrogen purification subsystem so as to meet hydrogen production capacity and purity specifications set by the fuel cell manufacturer, Daimler. The validation and testing of the integrated system has been done by General Electric at their premises in Rugby, UK. Through this project, HELBIO has completed successfully the construction, testing and delivery of a 40m³/h hydrogen system.

There is large market potential for this technology in the fields of telecommunication stations, transportation (trucks), marine (boats and yachts), off-grid or on-grid households and other buildings and small size farms. In general, the main need addressed is availability of electricity, independent of the presence or quality of electrical grid. This need is of the highest importance in developing countries like India, China, Brazil, and others. The HELBIO company plans to scale up its production capacity in order to achieve a cost reduction through economies of scale. In the meantime, the focus is on installing units for field testing in order to prove the product’s reliability through a life cycle analysis.