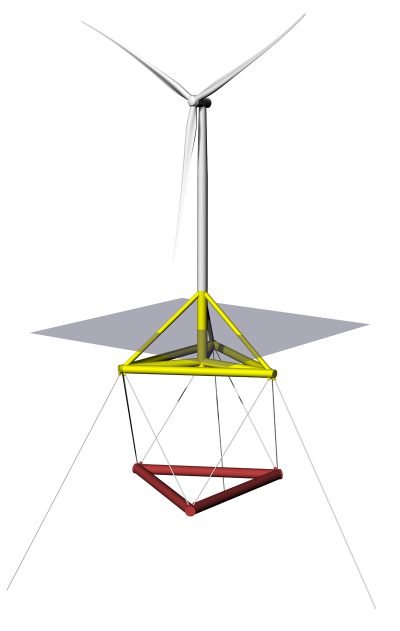 The potential of offshore wind is enormous. It could meet Europe’s electric energy demand seven times over, and the energy demand of the United States four times over. However, much of the offshore potential is at water depths that can only be served by floating systems. At the present time, a number of suppliers are offering floating offshore wind foundations, but at costs that are prohibitive for large-scale application. The root cause of the high costs is that existing designs have emerged from the offshore oil and gas sector; they are manufactured using conventional, non-industrialized methods, weights are measured in thousands of tons and manufacturing times are measured in months.

In contrast, the TetraSpar concept is based on the application of proven design and manufacturing technologies from the highly competitive wind industry. As a result, the weight is only a fraction of the weight of other floating wind turbine foundations, manufacturing takes place in factories using industrialized methods, and assembly and installation is measured in days or weeks, not months. The foundation and wind turbine can be installed in any port of a reasonable size using a standard, land-based crane, and the complete assembly can be towed to site and hooked up to the moorings and the electrical cable using standard tugs.

This project will be the first fully coupled numerical and experimental validation of the TetraSpar concept. The concept optimization efforts are focused in four main areas: Hydrodynamics, Mooring, Marine Operations and Structural Design.

The expected result of the project is an improved TetraSpar solution comprising a hydrodynamically and structurally optimized foundation, an innovative mooring arrangement, and a specification of a comprehensive, safe and cost-effective set of marine operations.

The consequence of a successful project will be a step-change in the levelised cost of energy from floating offshore wind power.