The Challenge: Clean hydrogen has the potential to decarbonise hard to abate sectors, such as industry and heat, which are responsible for two thirds of global emissions and help unlock the full potential of renewable energy. However, today it is up to three times more expensive than hydrogen produced directly from fossil fuels.

The Goal: To increase the cost-competitiveness of clean hydrogen by reducing end-to-end costs to USD 2 per kilogram by 2030.

The Mission: We will catalyse cost reductions by increasing research and development in hydrogen technologies and industrial processes and delivering at least 100 hydrogen valleys covering production, storage and end-use worldwide by 2030, to unleash a global clean hydrogen economy.

The International initiatives and partner organisations

The Clean Hydrogen Mission will accelerate the building of a global clean hydrogen economy by reducing end-to-end clean hydrogen costs to USD $2 per kg by 2030. This represents a tipping point in making clean hydrogen cost competitive with other energy vectors in different industries across production, transportation, storage and end-use.

To achieve the goal, Mission members together commit to deliver at least 100 large-scale integrated clean hydrogen valleys worldwide by 2030. These will generate economies of scale, pushing down clean hydrogen costs to catalyse the development of a global clean hydrogen economy.

Almost two-thirds of current global emissions arise from hard-to-abate sectors, such as industry feedstock and transportation. Clean hydrogen is a promising solution to decarbonising these sectors and will unlock the potential of renewable energy sources. In their Net Zero by 2050 Roadmap, the IEA calculate that global hydrogen use must expand from less than 90 Mt in 2020 to more than 530 Mt in 2050, with 62% predicted to come produced from electrolysis and 38% from fossil-fuels with CCUS (IEA, 2021). However, clean hydrogen is currently more expensive than grey hydrogen, costing between USD $3-6/kg to produce from electrolysis and approximately USD $1.5-2.5/kg from fossil fuels using carbon capture technologies, with distribution costs additional to this (IRENA, 2021). Early large-scale hydrogen deployment enabled through innovation could yield USD $100 billion annual system benefits globally at a carbon price of USD80/tCO2 (Vivid Economics, 2021).

We are bringing together a public-private coalition of MI countries, the private sector and international platforms to: 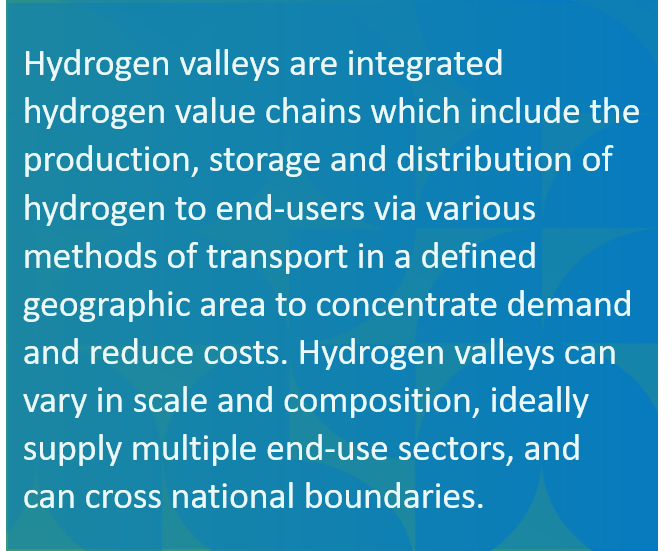 Together, the members will:

In addition, each member will:

“Australia is pleased to announce that we have committed more than $850 million to build an Australian hydrogen industry, including identifying locations for five hydrogen export hubs. This is our first step in achieving the mission goals by 2030.”

“Chile is proud to reaffirm its commitment to deploying large-scale green hydrogen valleys in the Antofagasta and Magallanes regions through policy support and public-private collaboration, which will leverage both domestic and international demand, as well as our abundant renewable resources, to deliver competitive clean fuels to the end-user by 2030.”

The European Commission will, together with the Hydrogen and Fuel Cells joint undertaking and the EU Member States, develop further the hydrogen valleys in Europe and abroad. This will create a strong network which will benefit from the foreseen extension of the hydrogen valleys platform as a significant step in helping to achieve our ambitious EU climate goals by 2030.”

“I am delighted to celebrate the launch of Mission Innovation’s Hydrogen Mission and, as a Mission co-lead, to reaffirm the UK’s support for the Mission’s ambitious – and achievable – goal.

Low carbon hydrogen is the energy carrier of tomorrow: innovation and deployment of hydrogen technologies will enable the decarbonisation of hard-to-abate sectors, boost the flexibility and resilience of low carbon energy systems and thus make a key contribution to global net zero. The new phase of international collaboration unleashed by the Hydrogen Mission places us in prime position to unlock this potential more swiftly and share its benefits most widely. We look forward to leading from the front”.

Minister Anne-Marie Trevelyan, Minister of State for Business, Energy and Clean Growth, and UK International Champion on Adaptation and Resilience for the COP26 Presidency, United Kingdom

“In establishing our National Hydrogen Strategy, we have committed to strengthening international cooperation on hydrogen technologies. Hydrogen will be instrumental in reaching Germany’s ambitious goal of becoming climate neutral by 2045. In order to satisfy our projected hydrogen demand, we will in the future need to import green and sustainable hydrogen. It is therefore an important goal to establish a global hydrogen market as swiftly as possible. Since increased cooperation on innovation can contribute towards achieving this goal, we are excited to join the new Mission Hydrogen.”

“The world needs to get to net-zero. There’s no other option. Hydrogen will get us there. Mission Innovation’s new Clean Hydrogen Mission accelerates a global clean hydrogen economy and pushes us faster towards the clean energy future we need. Canada is a proud founding member of Mission Innovation, and through it we will lower emissions, have prosperous economies that create jobs and leave no energy worker behind.”