| Our members | Sweden | Plans and Priorities

Sweden has had a government funded Energy RD&D programme since 1975. It was created in response to the oil crisis and initially formed to address the great oil dependency of the Swedish energy system at the time.

The current Swedish Energy R&I programme is based on the approach of having a balanced portfolio of thematic programs, activities and funding instruments to support the development and deployment of clean energy solutions and technologies.

The flexibility to be able to adopt new ideas and new ways of tackling existing energy challenges is very important. So, besides having programs initiated as an answer to detailed and technically specified calls of proposals, the Swedish Energy R&I program today includes programmes that are open for new and unexpected ideas. A need for boosting these kinds of activities has been highlighted. Also, the need for transformative R&D has been mentioned in the writings leading up to the establishment of the Breakthrough Energy Coalition. Sweden’s doubling pledge is just about these kinds of actions.

For the Mission Innovation, Sweden has therefore chosen to double the parts of our energy R&I that focus on funding for researchers and industry to work bottom-up with solutions to energy challenges and which at the same time supports long-term and transformative research and development. This is a part of the total Swedish Energy Research and Innovation funding that is closely related to the goals and the approach of the Mission Innovation initiative.

We will seek to double these efforts departing from a baseline based of average funding of the years 2013-2015 and until 2020. An average number is chosen because of variations in the funding over time.

The baseline number of 134 million SEK relates to the activities of Basic Energy Research, Innovative and energy relevant research and development, and energy relevant Strategic Innovation Areas. These three programmes are characterized by not having a specific technology focus beyond being original and excellent and addressing the energy challenge within the overall focus of renewables, efficiency, electricity and energy transmission and distribution, and energy systems.

We will undertake to double these efforts to 2020, either as expanded continuation of the programmes mentioned above, or through other programmes of similar character.

The focus of the entire programme of energy research and innovation

Synergies with other policies and measures in the energy policy area are to be explored.

The entire programme is to be implemented as a cohesive effort spanning the entire innovation system and addressing complete value chains based on an energy systems perspective.

The responsibility for the strategic planning and the implementation rests with the Swedish Energy Agency.

In the period 2013–2015, the type of support has been distributed as depicted in the graph below. 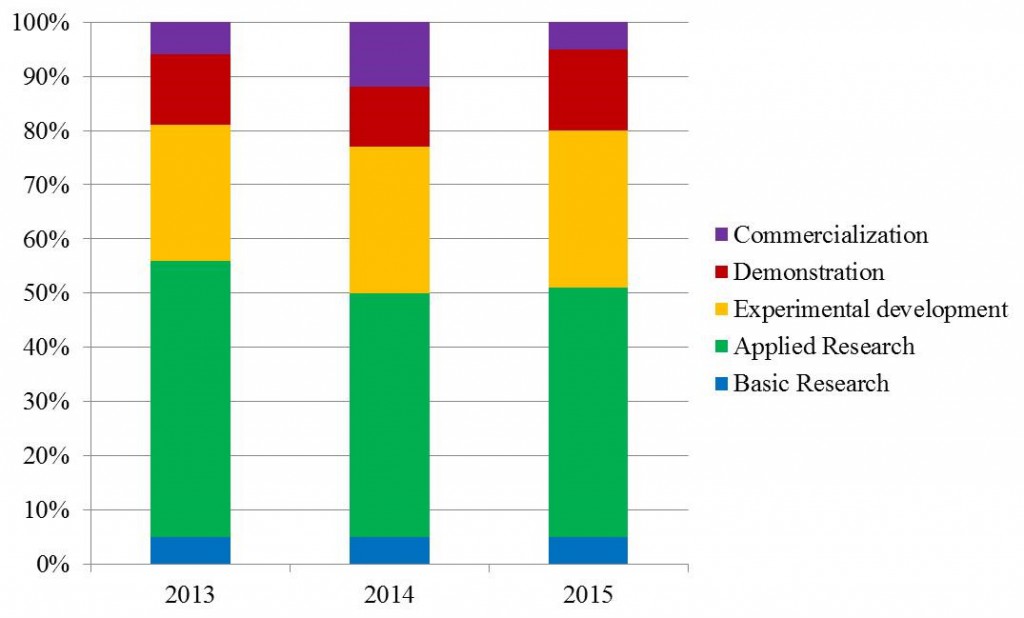 During the period 2013 – 2015 the main focus areas for the programme funding were energy aspects of the transport system, including advance biofuels and electric vehicles, the power system, including renewable generation of electricity, transmission and distribution, and bioenergy; from forestry and agriculture through processing distribution and utilisation for heat and for Combined Heat and Power. Other important areas were energy efficiency in industry, energy in the built environment and energy systems studies, including economic, social and human science studies.

Future developments of the energy research and innovation programme

In addition to the doubling of efforts on transformative bottom-up funding, Sweden is also on track to increasing the total programme on Energy R&I.

A baseline funding for the entire programme was established by a decision in 2007. This baseline was around 900 million SEK in the period 2007–2012. A baseline calculated as an average for the period 2013–2015 would be 1 139 million SEK. This value is calculated on the actual payment to all the projects in the programme, not the budget allocation.

An increase is to be expected from this baseline and forward. Decisions on general funding are taken in four year periods, and more in detail for each fiscal year. Proposals for coming years are currently being developed.

The total budget is expected to increase substantially by 2020, but a doubling in relation to the average for 2013–2015 cannot be guaranteed.

Other funding agencies also contribute to energy relevant research and innovation outside the specific energy R&I programme. Among these are the Swedish Research Council (Vetenskapsrådet), the Swedish Innovation Agency (Vinnova), and the Swedish research council for sustainable development (Formas).

In addition to the funding of research, development, demonstration and innovation, there are also a number of Swedish programmes or policies to promote the uptake of new, clean and efficient energy technology. Among these measures are the Climate Step, an investment programme for industry, local governments, regions and organisation to reduce climate impact. The budget is 1.9 billion SEK for the period 2015–2018. A special fund for public venture capital for energy and climate technology is being established. The total budget for the fund is expected to be 650 million SEK.

The Government in 2016 concluded an agreement on Sweden’s long-term energy policy signed by in total five of the eight political parties in the Swedish parliament. The agreement consists of a common road map for a controlled transition to an entirely renewable electricity system, with a target of 100 per cent renewable electricity production by 2040.

The Government and the parties agree that Sweden must have a robust electricity system with high security of supply and low environmental impact, and offer electricity at competitive prices. This creates a long-term perspective and clarity for actors in the market and helps generate new jobs and investment in Sweden.

By 2045, Sweden is to have no net emissions of greenhouse gases into the atmosphere and should thereafter achieve negative emissions.

An energy-efficiency target for the period 2020 to 2030 will be produced and adopted no later than 2017.

In support of the goals and ambitions of the Agreement, research and innovation should focus on areas that contribute to achieving established climate and energy policy targets, and that have prospects for growth and for exports. Energy research and innovation must continue to focus on technological development and demonstration and pilot projects in all areas within energy.

The European Union Strategic Energy Technology Plan has recently conducted a study of the priorities and interests of the member countries in the energy area.

The Swedish input to this exercise gave an indication of the priorities and interests of Swedish energy research and innovation at the time (2014). It must be noted that the description is not complete since it is made using general headings and descriptions agreed for the disposition of the SET-Plan activities, and thus does not necessarily capture all Swedish considerations. Also, it provides a snapshot of the situation at the time and priorities can be expected to evolve.

However, the government’s guidelines and goals for the Energy Research and Innovation programme for the period up to and including 2020 is currently being developed and not yet available. Therefore, the Swedish response to the EU questionnaire can be taken as at least an approximate indication of current interest.

Sweden reported high interest in engaging and activating consumers through better understanding, information and market transformation, and with innovative technologies, products and services. Sweden also has a high interest in increasing energy efficiency in buildings, in the heating and cooling sector, and in industry and services.

Sweden also indicated a high interest in modernising the European electricity grid and establishing synergies between the various energy networks, including aspects such as energy storage and conversion of electricity to other energy carriers, and providing the energy system with flexibility, demand response, security and cost-effectiveness.

Sweden also showed interest in the development and demonstration of holistic system optimisation at local/urban level (Smart Cities and Communities), as well as in accelerating the development of renewable electricity and heating/cooling technologies.

Sustainable Advanced Biofuels, as well as other advanced alternative fuels are also among the areas of high interest in Sweden.

A baseline funding for the entire programme was established by a decision in 2007. This baseline was around 900 million SEK in the period 2007–2012. A baseline calculated as an average for the period 2013–2015 would be 1 139 million SEK. This value is calculated on the actual payment to all the projects in the programme, not the budget allocation.